I became a mom to a child with Down syndrome through adoption. Nathan had lived in a Bulgarian orphanage since he was one day old.  In Eastern Europe, many children with Down syndrome live in orphanages because there is little support for families caring for children with special needs.  The roads that led us to Nathan’s orphanage were unpaved, the surrounding buildings stark and cold.  One would never know children were housed in this building because even inside it was eerily quiet. When my 11 year old daughter and I sat in the director’s office waiting to meet him, there had been no laughter or smiles.  There was only solemn conversation between staff and our guide in a language I didn’t know.  I was told the director didn’t understand why we would choose to adopt a child with Down syndrome.

A tiny elf of a boy, 4 ½ years old, was brought into the room.  He couldn’t walk independently, but when his hands were released he stood solemnly by himself. Wispy brown hair covered his eyes.  He made his way slowly around the room, stopping briefly to guide each person’s hands in gentle clapping movements.  When he stopped in front of me, my heart melted.  Someone prompted me to lift him up and follow with him. He felt weightless in my arms. Stoic and silent, he showed no resistance to me holding him. We were taken to a room with toys and left with only our guide and that tiny child. We played, clapped, and sang.  Tentative smiles turned into grins that reached clear across his face. Certain play made him giggle and we fell in love with him. At times he just leaned into us, soaking up all our love.

As required for this country’s adoption process, we visited him several times before returning home.   The remaining paperwork would take six long months to process. Leaving the orphanage for the last time, my daughter started crying. That sweet boy wiggled out of his nanny’s arms and with speed that surprised us all, crawled down the hall toward the girl to which he had become so attached. She held him and cried. I cried. I think every eye in that place spilled tears. They had to pull him away from my daughter.  We cried in the car all the way back to the hotel.

When I met my son, I gave little thought to him having Down syndrome. We fell in love with that boy and his diagnosis didn’t matter to us.  What he did or didn’t do compared to his peers didn’t matter.   Down syndrome didn’t define him then and it didn’t when we were reunited six months later. Today, Nathan is a 12 year old boy who likes to listen to music, go swimming, eat chicken nuggets, and tease his sisters. He is very attached to his family, best friend, his bus aide, and his teachers. He goes to respite nights and parties. Every summer he attends the Days of Summer Camp and other activities hosted by the Down Syndrome Association of Delaware. Though the volunteers and staff have changed over time, we are grateful several have been there to support and encourage Nathan and our family since he joined us.  Seven years ago, our family chose to adopt a child from a place where people with Down syndrome are housed in orphanages and institutions.  But now, Nathan is a cherished son, brother, grandson, student, and valued member of our community- and he just happens to have Down syndrome. 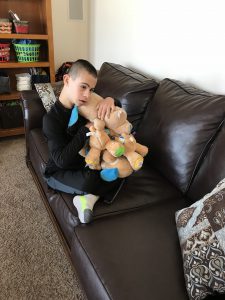 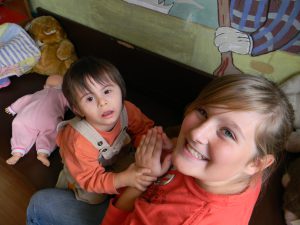 About the Author: Jennifer is a mom to a diverse crew, including one with Down syndrome and one with a traumatic brain injury and cerebral palsy. She appreciates beauty in nature, kindness in people, and a good yoga class.