I will never forget that moment the doctor woke me from a nap to tell me my son has Down syndrome. It was not during my pregnancy, or at the hospital when he was born, or even at his follow up doctor appointment. In fact, it was only after he had been hospitalized for RSV, been diagnosed with congenital cataracts, and I had been told he had a heart defect that would require open-heart surgery to repair. It was not even until he was about three weeks old.

For an entire pregnancy and after being handed a perfectly healthy baby boy, I found out I was living a lie. I don’t think I have ever been so betrayed by life as this made me feel. I felt like I was standing in the room of life when suddenly I found myself flat on the floor, as if the very ground I was standing on had been snatched back from under me leaving me stunned, choking on the breath I was struggling to take.

I continuously wonder back to that day as I sat alone in utter silence after the doctor left the room. As I stood at the end of his crib, peering over him. Worrying for him, missing his first week of life before I found out all these things. I was on top of the world then, but now I was not. I had spent a lifetime making sense of things and building up a mountain of understanding and expectation for how life works. And right in that moment, that idea was shattered. My world crashed down and I had to start over.

It is in this attempt to tell my story that I can somehow relay what it was truly like to be told to have a child with Down syndrome.

I wanted my son more than anything. I spent month after month hoping that I would finally become pregnant. For a total of 2 years and 3 months my husband and I tried desperately to get pregnant. I vaguely remember a time about three years ago where I had a rare conversation with god in which I pleaded “If you just do this for me, just give me this one thing, this one precious gift, I will finally be happy”.

Because what I see now is that I was given the most precious gift. Sight. True understanding. The ultimate opportunity to build myself anew. I was ignorant before. So over the last two years I have watched my son undergo four surgeries, countless therapy appointments, several hospitalizations, and more pain than any one person should have to bear. I have watched my life change completely. And with time I have slowly rebuilt myself into this person I never knew I could be. My son did that. His struggle did this for me.

I thought back to that moment one year later as I stood in an empty hallway across from an OR nurse. Holding my son in my arms with every last mom instinct I had screaming not to let him go. Not to hand him over to this nurse I knew would take him back to surgery to have his chest pried open, his heartbeat halted, and his precious heart cut open.

It is at these times when there is too much fear in your heart to hold it, too much pain to bear that people are truly changed. I stood at the threshold of losing everything, of losing myself, but I came back from that. I returned with my son in my arms and his heart in his chest beating still. So how, then, could one not be changed? 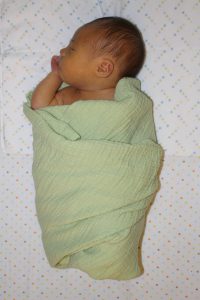 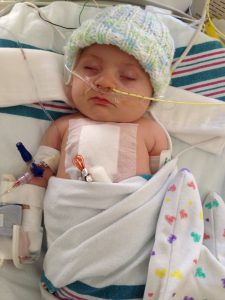 About the Author: Amberly is happily married and settled down near the PA-DE state line. She has two beautiful, adventurous children that truly enrich her life. During the rare spare moment she loves a good book, a good movie, or conversations with new friends. She also has a sweet disposition for small, furry beings.