Lauren began working for the Down Syndrome Association of Delaware in March of 2014 as Program Director. She became Executive Director on June 1, 2017.

Lauren first became involved with the DSA of DE as a volunteer in 2010 for numerous yearly events. She continued her volunteer efforts in 2012 when she started the Days of Summer Camp Program. This program continues to this day and serves over 150 children a year. Lauren was presented with The Down Syndrome Advocacy Award from the DSA of DE in March of 2013 for her outstanding volunteering efforts.

Lauren currently serves as Past President for Down Syndrome Affiliates in Action. This organization models best practices for Down Syndrome Associations across the country and works towards a future in which persons with Down syndrome have access to the resources they need to meet their potential. She previously worked for the National Down Syndrome Congress from 2013-2022. She is also co-founder of Down to Box, a national non-profit which teaches boxing techniques to individuals with Down syndrome.

Lauren graduated from the University of Delaware with a Bachelor’s degree in Public Policy with a minor in Disabilities Studies. Her Master’s degree is in Public Administration with a specialization in Nonprofit Management. She lives in Wilmington, DE with her husband, Bryce, their son, Easton, and dog, Bailey. 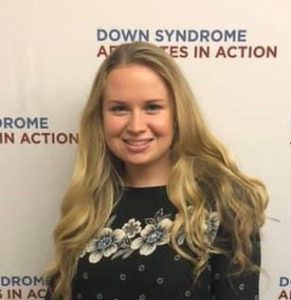 Kathleen first became involved with the DSA of DE in 2016 as a volunteer for the Days of Summer Camp. In 2019, she began serving on the Delaware Down Syndrome Walk committee as a volunteer, and she was hired full-time in April of 2021. Kathleen graduated from the University of Delaware in May 2018 with a Bachelor’s degree in Criminal Justice and minors in Sociology and Disabilities Studies. She worked for the State of Delaware in Child Welfare for 3 years before joining the DSA of DE.

As Program and Communications Coordinator, Kathleen is responsible for planning the DSA of DE’s events and running our social media pages and website. Kathleen is a Delaware native and has a cat named Mo. 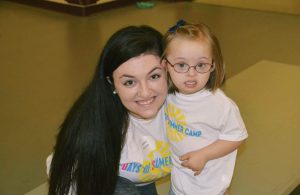 Kellie began her time at the DSA of DE in September of 2021 and started her role as Cafe and Office Manager in June of 2022. Kellie graduated from the University of Delaware in May 2022 with a Bachelor’s Degree in Human Services with a concentration in Administration and Family Policy as well as a minor in Disabilities Studies.

As Cafe and Office Manager, Kellie is responsible for the overall management of the DSA Cafe & Gift Shop and assists with the DSA of DE’s various events and programs.

Kellie is a Delaware native and has a dog named Apollo. In her spare time, she plays softball and enjoys going to concerts.

Susan Blessington has been involved with the DSADE since 2000 when her son, Conor, was born with Down syndrome. Before coming on part time as the DSADE Outreach Coordinator, Susan volunteered with the outreach committee for many years. She and her husband are also proud parents of Clare and Sean. Susan loves connecting with new families and providing them resources to help at any stage of their journey. Beyond her work with the DSADE, she volunteers with various organizations such as Waggies by Maggie and Friends, a dog treat company that employs adults with intellectual disabilities. Susan and her family love traveling and spending time at the beach. If you visit the Down Syndrome Clinic at Nemours, you will likely meet her! 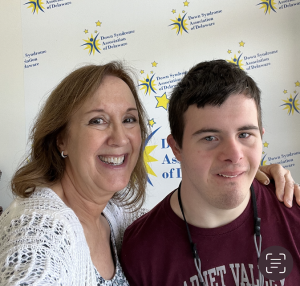 Ari Avila was born in Mexico but raised in her home state of DE since the early age of six is a proud and busy wife and mother to four wonderful children; one whom happens to have Down syndrome. Ari is fully bilingual in both English and Spanish.

She graduated with high honors and received her national certification as a Medical Assistant back in 2013, even though she has chosen not to be employed in the medical field she has volunteered at the Down syndrome clinic at Nemours. She has also volunteered with the Down Syndrome Association of DE as an outreach parent for Spanish speaking families welcoming them and providing resources, as well as translating important information. Her love for her son Eric and her own experiences has opened a passion to help other families experiencing the diagnosis of Down syndrome specially within the Spanish Speaking community. She wants to engage more with influential decision makers and thought leaders within the Down syndrome community to bring respect and awareness. She’s open to challenges, conversations, and an exchange of ideas from Down syndrome associations, hospitals, clinics and most importantly families. 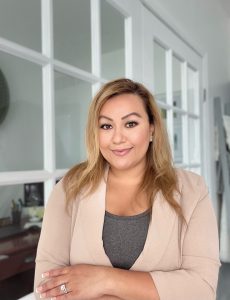